One of my best friends from grad school round 2 has been having a tough time of it lately. She went on to do her own round 2, and she has been struggling to manage her new program’s demands. To try to space out her work load, she decided to take lots of summer classes and double her summer teaching load, which would reduce the courses she needed to take during this school year as well as give her a semester off teaching so that she could have more time to devote to her own dissertation. She also decided to move so that she could live closer to campus and cut down her long commute time, so she scheduled the move for the only ‘free’ week she had…the only free week she has had since she began this program, and the only one she will have until Christmas, provided she completes all her semester work before then.

And that was when the trouble began. Two weeks before the move, she found bedbugs in her old apartment and the landlord refused to do anything. She had to tackle all the extermination and prevention in her old place on her own dime as well as take all the precautionary steps and treatments in her new place, too. Much of the support she had lined up to help her move backed out because they didn’t want to be exposed to a possible bedbug threat, so her move was more laborious and expensive than anticipated. She’s been settled in the new apartment for a few weeks now, but this past weekend she discovered that her indoor cat had fleas. Upon tearing up her new apartment to determine the extent of the flea problem, she discovered evidence of a major mouse infestation (likely the source of the fleas, too). At that point, all the stress and exhaustion caught up with her, and she got caught in a Murphy’s Law loop: everything that could go wrong did.

This friend knew I’m a witch, so she called me up, described all her troubles and said, “Melissa, you know I’m a hardcore atheist, but I think I’m cursed. Can you help me break it?”

Are these the harbingers of a modern day curse?

Even though I’m a witch and therefore hold an awful lot of beliefs that seem kooky from the outside, I’m pretty skeptical when it comes to curses. I don’t deny that they are a thing some magical practitioners do, but honestly they take a fair bit of time and planning, not to mention mundane and magical effort. Most of the practitioners I know would rather spend their time working more positive things to help their own selves out rather than heap negative things upon someone else. Of course, some non practitioners can deliver some walloping curses, but usually that is because you’ve delivered them an egregious wrong, and you are the focus of all their anger and frustration. Unless someone is seriously pissed off at you, you are unlikely to be the target of a curse. And because most people don’t actually do terrible things to each other, the likelihood that anyone is being cursed is extremely low.

But right before I opened my mouth to tell my friend she was being silly, I stopped. It occurred to me that when it comes to curses, the number one suspect on the list of people who could have cursed you is…you. We’re our own worst enemies. I guarantee that no one thinks as many bad thoughts about you as you do yourself. People are egocentric creatures, and most don’t care enough to focus their ire upon someone else.

I knew my friend has been struggling for a long time with lots of issues. She doesn’t feel like she’s good enough for anyone to love her, so she’s largely stopped dating. She also a victim of imposter syndrome, something I know all too well. She’s also in a hypercompetitive world class graduate program, and the people in her cohort are much more likely to feed into her feelings of inadequacy than they are to help her overcome them. And I know from my own struggles that when I feel bad about myself, the mundane struggles that come up seem much bigger and are much harder to solve.

So I decided to become a cursebreaker. 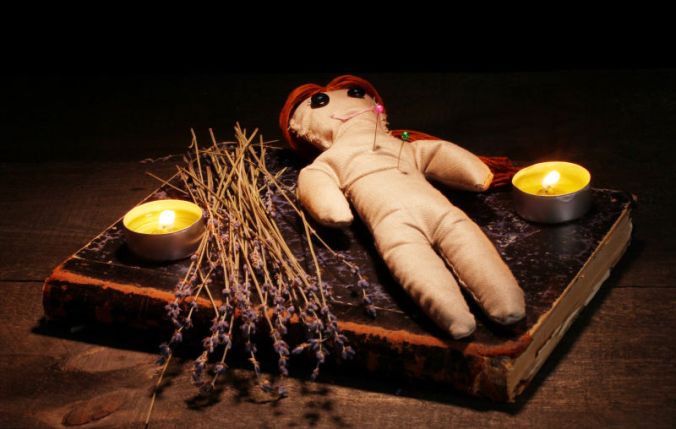 Here is a stolen image of exactly what I did not do.

It doesn’t really take that much time. In this particular instance, the thing that pushed my friend into panic was the litany of pests. But these are a symptom and not the curse itself. So I took a couple days to visit her and give her a hand. We scrubbed down all the cabinets in her kitchen with a bleach solution and removed all the mice droppings and urine trails. Then we rubbed peppermint essential oil into all the nooks and crannies and placed a few different traps about the place. I made her up a ‘spelled’ peppermint floor wash to use in her (awesome) spray mop, which she uses daily in the kitchen. And we re-organized her pantry and made sure that all food was stored in rodent-proof containers.

To combat the fleas, we treated her cat as her vet instructed and washed all her bedding and linens. We used a flea spray on her carpets and furniture and sprinkled some of the diatomaceous earth she’d got in the bed bug incident on them, too. We did a solid vacuuming of the whole place with my shop vac (diatomaceous earth murders vacuum filters), and we ended up buying her a new Dyson vacuum to replace the broken one she’d been using and doing another thorough vacuuming with it. We also timed how long it took us to vacuum the apartment (25 minutes) and figured out how my friend could work that into her schedule at least twice a week. (Regular vacuuming, if you don’t know, is a major deterrent for most insect problems.)

Simply having someone to help her with all these mundane issues did a wonder for my friend’s outlook.

After all the cleaning, we performed a house blessing to help her feel settled and secure in her new home. And then I helped my friend create a working schedule that could help her balance her classwork as well as allow for some things people just need. Like Netflix and Facebook. Or time to cook, clean, and exercise. Or time to call your parents and friends. Or time to pamper yourself. I gave her a ‘spelled’ bath salt mix of rose, lemon verbena, and mint to use on her new Wednesday spa night and some vaguely magical visualizations, cleansings, and affirmations to do to help her relax and feel good about herself.

Did I do magic to break a curse? Maybe not the ritual magic my friend probably meant when she asked, but I think we worked a far more effective magic with friendship, support, and a few fun witchy window dressings.