When I was first learning about witchcraft and discovered that some witches used scourges in their initiations and rituals, I was a little alarmed.  I’d always heard that word in a majorly negative context, such as “widespread devastation wrought by war or natural disaster” or “a means of inflicting punishment or suffering to a person”.  Even basic dictionary denotations have the mental alarm bells screaming “Danger, Danger!” when it comes to giving the word “scourge” a connotation.

A still from the 2004 religious snuff film “The Passion of the Christ.” It shows a horribly scourged Christ and his two assailants. Note, though, how each of their scourges basically have blades in their whips.

Worse, I was coming to Paganism from a Catholic background, so my one major exposure to scourging I was the type Jesus endured before his crucifixion.  Of course, Catholics really like to impress upon their church just how graphically horrible Christ’s suffering was so that the congregants can be properly awed by just how much Christ endured in order to ‘save’ mankind.  So my Sunday School spent an inordinate amount of time teaching us children the brutality of a Roman scourging.  We learned how the whips were specifically designed to lacerate the flesh into ribbons and cause deep bruising.  We learned how people were beaten so badly they died from their injuries.  We learned how scourging proceeded a crucifixion so that the injuries sustained would hasten a death that might otherwise trail on for days.  We learned that Roman scourgings were so bad, one of the perks of becoming a Roman Citizen was that it was illegal for you to be scourged!  In short, we learned that scourging was a Very. Bad. Thing.  One to be avoided at all possible costs. 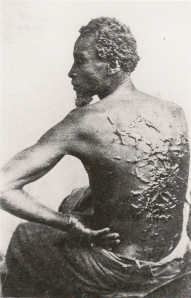 A former African American slave displaying his back, scarred from a whipping administered by his master.

My secular public school education also didn’t do much to teach me that a scourging was anything but brutal.  To be fair to American Public Schools, this isn’t exactly a lesson that is explicitly taught.  Rather, it is the impression I gathered from my one exposure to it:  learning of the atrocities perpetuated upon African slaves before the American Civil War and upon African American citizens after it.  There, we learned that whippings were a common punishment put upon slaves.  More severe whippings were for more severe crimes, such as attempting to run away or perhaps for learning to read.  These whippings might be so bad as to be fatal.  On the milder end, an overseer might crack a whip once over one dawdling slave’s back just to get the rest working more quickly.  What I did not realize, though, was that the whips most commonly used for these punishments were also whips specifically designed to create injury.  Numerous drawings of slave beatings show the implement used was essentially akin to a bullwhip, the tip of which can move so fast under a skilled hand that it has supersonic speed.  At that speed, flesh cuts like butter.  Ears can be removed in just a flick.  But again, the whip is designed to do that.

What I had yet to learn was that while some whips are designed specifically to cause injury, many others are not.  Indeed, it is highly unlikely that a cluster of soft ropes or wide leather thongs attached to a handle could cut flesh even if the beating went on for hours.  Introduce knots or tie spikes or metal weights into the lashings, though, and you’d soon have a formidable weapon.

Of course, witches have little interest in tearing each others’ flesh to ribbons.  So, obviously, they are not going to use whips that do so.  At their most visually intimidating, most covens would probably use something akin to the contemporary soft flogger shown below.  Its pliant thongs will feel more like a hard thud than a biting sting, and it is essentially impossible to tear flesh open with one of these.  All in all, they will provide a temporary sensation, not permanent injury.

A flogger style scourge made of cowhide.   Despite its intimidating appearance, it would be difficult to inflict massive injury with it.

Better yet, witches who use the scourge take the ideal of “Perfect Love and Perfect Trust” very seriously.  If, say, an initiate trusts an initiator enough to submit to a scourging, the initiator must trust him or herself enough to be able to safely scourge.  Therefore, those who can perform scourgings should actually practice it and hone their skill.  They should learn to control their aim and intensity and to focus their blows on the well-padded areas of the body that can sustain them, such as the buttocks and thighs, upper back, and the male chest.  They will also know to go easier on some areas like female breasts, calves, the soles of feet, and genitals (if those are to be whipped at all), and to do everything possible to avoid the abdomen, spine, face, neck, all joints, hands, lower back, torso sides, and all parts of the feet save the soles.  Scourging in this manner should, in fact, be quite safe.

That’s not to say that every witch should allow him or herself to be scourged without question.  The witch who is to be scourged should definitely make sure his or her scourger knows how to control the whip, is aware of areas of safety, caution, and danger, and knows  how to vary the sensation of the whip.  Ideally, the scourger should be able to demonstrate his or her skill on a velvet or towel-covered cushion (which will let everyone see where the whip strikes) in front of the coven or the scourgee before he or she is permitted to use this tool in ritual.