Happy Earth Day 2015!  Over the past handful of years, I’ve taken steps to greening my life that I never would have considered back when I lived in the Midwest.  It started with realizing just how many plastic bottles I was using in my beauty products and eliminating shampoo from my consumer purchases.  But then I branched out in a big way.  I’d already come a long way in eliminating Ready-To-Drink plastic bottled beverages from my diet (I still keep a case of ’emergency Coke’ on hand…but a 24-can case lasts me well over 6 months), but I also found a travel-bottle method (a Cuppow and a canning jar) that allowed me to recycle my entire collection of mismatched bottles and plastic cups.  I began to eschew the paper and plastic bags my grocery stores provide and brought my own straw baskets to the supermarkets and shopping malls.  I stopped buying thousands of single serving plastic containers of yogurt and started making my own Fage and packing it into small, infinitely reusable canning jars.  Most recently, I’ve begun making my own laundry soap and eliminating chemical fabric softeners to avoid amassing more plastic bottles.

Over the past couple of months, though, my focus has shifted from my plastic consumption to my paper consumption.  I’ve done a few basic things to bring my paper consumption down, such as discontinuing my newspaper service in favor of online publications and contacting all the stores that send me promotional materials in the mail and requesting that they either remove me from their lists or switch to contacting me via e-mail.  I’ve also finally broken myself of my Post-It habit by substituting it with Apple’s Stickies program and augmenting it with an occasional 3×5 card.  There’s really only been one thing so far that I’ve struggled with reducing:  paper towels. 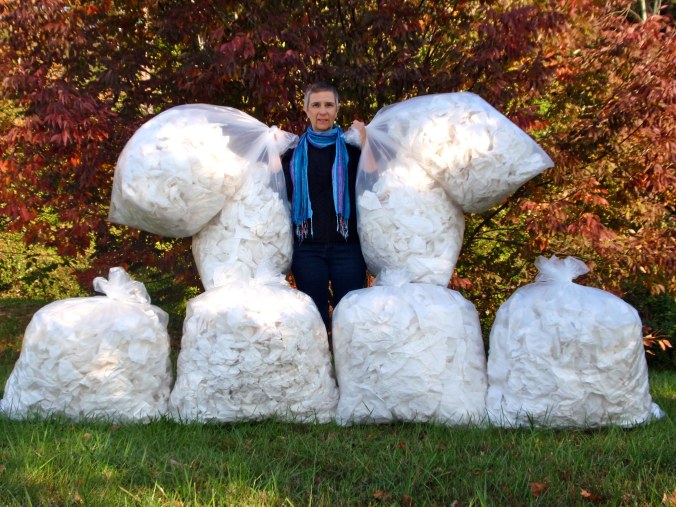 The average person uses 2,400-3,000 paper towels–at work alone!–each year, which looks like this when you put it all together.

As much as I wish it were otherwise, paper towels are just not good for the environment on any level.  Even once you get past the fact that they are incredibly bulky for their weight and so require a lot more energy to transport from point A to point B, there’s still a lot of environmental issues.  For starters, most paper towels are made from virgin tree pulp.  This means that trees are cut down and harvested for a product that will be used ONCE.  There are also myriad environmental issues all along the manufacturing process with one of the biggest being the amount of dioxin released during the bleaching process.  There’s also a ton of waste in the packaging, including but not limited to the plastic that is wrapped around each and every roll.  And this process is repeated over and over again to feed our desire for having a paper towel handy.   And at the end of this whole cycle, the used paper towel ends up in the garbage!  Once it’s there, all it does is fester and add to the methane gas issue and global warming.  Can we say “not worth it!”?

Back when I was researching green fabric softening ideas, I came across a massive group of new mothers who had taken up using cloth diapers for their babies, and many of them were raving about the absorbancy of clean, white cotton flour sack kitchen towels, which can be found very economically at Wal-marts and Targets across America (in addition to many other less problematic establishments).  As it turns out, these cloths are astoundingly absorbent so long as you avoid using commercial fabric softener on them, and their lack of any colored decoration means that if they get really grimy, you can bleach them to your heart’s content.  Their uniform size and thickness makes them a cinch to fold quickly, and their relative thinness means that a ton of them will fit into even the smallest drawer in the kitchen.  They’re also only about $1 each, so if you do have to get rid of any, you won’t go broke replacing them.  I’ve been using these flour sack towels for a couple of months now, and I really can’t say enough good things about them.  In fact, I recently used some to clean my bathroom–something I would have only used disposable paper towels for before.  I used only 3 towels for the whole grimy job, rinsing them frequently, and popped them right in the washer when I was finished, making sure to splash some bleach in the dispenser.  They emerged perfectly clean and perfectly sanitized.

The only real beef I have with these towels is their size.  The towels wad down to a comfortable large handful, but they can still be a little unwieldy.  So I returned back to the cloth diapering forums and discovered that many DIY mommies had turned to using white Birdseye Cotton fabric to make their own diaper cloths.  Better still, many people were commenting that the thinness of this fabric reminded them (positively!) of paper towels!  As I did a bit of research, I discovered that other crafty folk had taken to using this fabric to create what they called “unpaper towels.”

Basic “unpaper towels” from birdseye cotton, as crafted by the Etsy seller Natural Linens. They’re pretty easy to make.  Just cut out squares of your desired size and serge the edges.  Rounded corners make the serging very easy, and it also looks pretty.

At their most basic, all these “unpaper towels” are are smaller squares of pre-shrunk birdseye cotton that are then ironed flat and the edges serged to keep them from fraying.  To keep their awesome absorbancy, they should not be washed or dried with a commercial fabric softener.  Some crafters prefer to make the squares of a double-thickness of the fabric, and still others like to top the birdseye cotton with a more decorative, pre-shrunk cotton.  One idea that I’m quite fond of is fastening snaps to the corners of these clothes, then snapping a bunch of the towels together and then spinning them around an old paper towel cardboard roll.  This would effectively allow you to put these towels onto a standard paper towel dispenser, which can certainly be a lot more convenient than keeping them in a drawer.

Particularly pretty “unpaper towels” using a green microfiber “working side” and a cheery retro kitchen print as the “decorative side”.

Honestly, you can really go a bit nuts making super-attractive “unpaper towels.”  I think that if I made anything that looked quite as pretty as the vegetable print ones seen here, I’d never trust myself to use them for the dirty messes they really should be used for.  That being said, if I was going to whip up a set for a gift, I would probably go the more decorative route.  I have a feeling that the extra touch would probably nudge most people into using the towels more than a plain set would.  I can also see a more decorative set being especially useful in a bathroom where you’d primarily be using them to dry just-washed hands.  There’s no real risk of massive staining in this application, and it’s really a lot more sanitary than using the same towel everyone’s been using for the past week.

If crafting up a few rolls of “unpaper towels” seems like it would interest you, birdseye cotton is fairly inexpensive.  You could probably get it for maybe $4 a yard, which will probably craft about 9 “sheets” altogether.  To properly serge the edges, you will need an overlock sewing machine.  These are unfortunately really expensive machines, ranging between $300 and $600.  You can, however, make a passable substitution by using a zig-zag or elastic stitch on a standard sewing machine.  A nicely instructive video for this process can be seen below: