Gardnerian witches get a lot of flak in the greater Pagan community for being dogmatic, unimaginative sticks in the mud, which–frankly–is probably deserved given that what the community mostly sees out of us are our fractious Witch Wars, snide remarks about who can call themselves Wiccans and who can’t, and stupid arguments about which lines or material are Gardnerian enough to pass muster.  It’s a darn shame that its the negativity and not the amazing, positive creation that leaks out of our oathbound circles.

I think that Si Mandragora, an initiate of both Gardnerian Wicca and Haitian Vodou (but very particular about not mixing and matching his magic), is doing some great work to show our more creative side.  Si is the founder of the group Circle of the Oaks Grove out of Fort Lauderdale, Florida, where he works mundanely as a graphic designer.  Naturally, he’s brought his professional skills to his personal spiritual practice and creates lovely Pagan images in a wide variety of styles.  Some of his work can currently be seen every day on this site:  he created the graphic banner for the Gardnerian Seekers and Initiates Facebook group, which I use for the group link on my home page.

Most of Si’s work is for his own personal use, but he does maintain an Etsy storefront which he uses to sell prints, plaques, buttons, and other examples of his work.  His most popular offerings to date have been this pair of Goddess and Horned God prints.

I just adore these prints, and they are so useful for sparking a discussion about British Traditional ideas of the Goddess and God.  In both, the figures stand within their symbols, and the surrounding images describe more about their natures.  The necklace-wearing Goddess, for instance, has the moon and stars above her, but she’s shown standing on the earth, which shows she is both the lady of the silver moon and the green earth.  From her grows an apple tree, a symbol of life and health (an apple a day…), and the hidden nature of magic.  Around her feet grow the classic witch entheogens:  belladona, amanita, and mandrake.  It’s a clear visual of how she brings life to the universe and gives us the tools to go within ourselves.  The Goddess is flanked by the two wheels, and their doubling calls attention to the symbol’s dual use as both the wheel of the year and the eight paths of power: both essentially patterns by which to honor her.  I even see maiden/mother/crone symbolism here.  The moon at the top is transformed into a bow, a symbol of maiden huntress energy.  The apple is growing forth from her body, which makes her a mother, and the skull at the base along with the entheogens notes the dangerous wisdom of the crone.  I’m not sure what the flowers are that chase the image, but they are definitely the five-petaled variety.  Most flowers actually have pentagonal geometry, so I rather look at them as showing how the Goddess’s mysteries are within the framework of life.

The God image is equally rich.  Suns top the picture along with a set of crossed keys flanked by lightning.  The keys are certainly a unique symbol in Paganism, for they’re most usually associated with the Catholic Papacy where they represent the keys to the kingdom of heaven.  (It is to be noted that in Christianity, the key blades are up and the bows are down; Si has reversed that here.)  In Christianity, Jesus gives Peter these metaphoric keys saying “whatever you bind on earth shall be bound in heaven, and whatever you loose on earth shall be loosed in heaven.”  To me, these keys translate well into Paganism as a symbol for True Will:  definitely the territory of the God.  The action coming forth from that will, then, is the lightning, or pure, focused energy that sets that will into motion.

Directly beneath the keys are a mirrored set of stars and crescents that are nestled within His antlers.  At first these moons struck me as incongruous since they’re so very much a Goddess symbol, but then I realized that His antlers are essentially supporting Her, which reflects his supportive roll in helping her create and maintain life.  By the God’s feet are a small oak tree and a skull with briars growing from it: these clearly connote his roll as the Lord of Life and Rebirth.  He holds a sword, but it is pointed down and not held as a weapon: I find this to mean He is aligned with judicious knowledge and purposeful will.  (Depending more or less, I suppose, on whether or not you ascribe the blade to air or fire.)  He, like many representations of Cernunnos, is also shown with snakes, which are symbols both of energy flows (kundalini), regeneration (sloughing of the skin), and–as some have it–virility.  All of these are excellent connections with God energy.  The torc at the base pulls on warrior energy as Celtic men of status and power wore these.  This image is chased in what looks to be seed pods, such as those of the poppy.  My thought on their inclusion is fairly basic:  seed pods are seminal, and that connection is self-explanatory.  They could also be thistles, which are symbolic of strength and protection.

I’m a huge fan of these images, and happily purchased copies of my own.  In fact, I even had them framed and matted.  Here they are in their current location in my home: just above my altar in my bedroom. 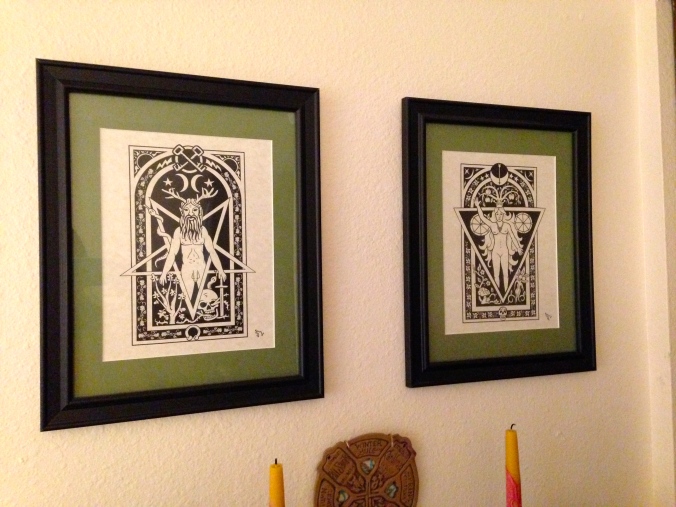 Currently I am hanging these side by side above my altar.  Full Disclosure:  Si prints these on a bright white cardstock.  I had a local print store copy them onto ivory parchment.

One thought on “Mandragora Magika’s Goddess and Horned God Prints”