Disclaimer:  I edited and re-wrote this several times, and I still think it’s “whitesplain-y.”  I’m sorry, y’all…I don’t know how to write about race outside academia.

At this point, most Pagans with an Internet connection know that the big brujería brouhaha at this year’s Pantheacon was racism.  Many also know that the satirical program “Pantycon” was at the root of the problem.  For those not in the loop, Pantycon has been an anonymous mainstay of the Convention for years, and it largely pokes gentle (if biting) fun at different convention offerings and general current events within the Pagan world. 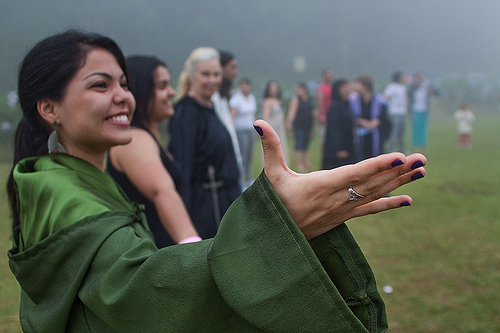 A woman of color leading an open Pagan ritual. Because she’s an awesome human being partaking in an awesome religious practice.

This year, there was a prominent theme of race and cultural appropriation in the convention.  Initially, there were two panels pertaining to racism and Pagans of color (a panel hosted by Crystal Blanton called “Bringing Race to the Table; An Exploration of Racism in Paganism” and a “Pagans of Color Caucus” hosted by Xochiquetzal Duti) and two panel discussions tackling issues of cultural appropriation (one with T. Thorn Coyle and Friends called “Honoring or Appropriation? What is the Difference?” and one with Starhawk and Friends called “Working with Diverse Traditions”).  These are not atypical offerings for the convention, but perhaps had a little more interest behind them given a pair of statements by the Covenant of the Goddess delivered a few months ago.  The more troubling of the two was an especially anemic December 2014 statement that ostensibly related to the news coverage regarding white police officers shooting innocent black men.  This statement was little more than bland pap, saying nothing concrete–not even what exact “current events” (IE: racist murders) it was addressing.  After some COG members “felt the Board’s original statement did not go far enough in addressing the issue”, a much more targeted second draft was issued.  Still, many Pagans remained deeply disappointed by the first (and even the second) draft, feeling that saying nothing would almost have been preferable to those meaningless words.

Reading through the COG statements, it is easy to get the impression that the organization is saying, “Oh Gods.  Racism.  We should probably say something.  It’s expected of us.  But honestly, I just can’t get angry about this shit one more time.”  It was inexcusable of such a prominent organization.  So, between the convention’s emphasis on race and this current event in our sphere, Pantycon wrote the following “workshop description.”

Isn’t all this talk of social justice and racism just tiring? Don’t you wish you could just ignore it and put out meaningless statements of pure pablum? We’ll discuss how to ignore requests for consideration by pagans of color, cover up racist actions of high-ranking members, and pretend that you don’t understand the resulting outrage. Remember, #AllLivesMatter, except  when it’s uncomfortable or inconvenient.
Large Umbrella Pagan Group has been around for long enough that they think they can get away with  this stuff.”

I think that we can all agree that these words crossed a line even if you knew about the COG statements.  If you did not (and not all Pagans follow the COG regularly, if at all), then they are one hell of a slap in the face.  When I read this…well, I’m a white person who is deeply frustrated by the COG and hashtag activism, and I was upset.

It’s taken me awhile to be able to articulate why this shook me so, and to explain it, I actually have to turn back time to a discussion I had at my very first Pantheacon:  Pantheacon 2012.  I’d never attended such a large Pagan gathering before, and since it was in San Jose, I expected there to be many Bay Area locals.  In my naiveté, I expected to see a rainbow of faces trailing through the Doubletree’s hallways simply because the Bay Area is an ethnically diverse urban area.  I figured that if the Bay Area was roughly 53% white, 8% black, 19% Asian, 19% Hispanic, and 1% Native, then I should see a similar demographic amongst the attendees.

Yeah, this wasn’t so much the case.

But the rainbow I observed was mostly made up of shades of ecru, eggshell, and bisque.  Don’t get me wrong, there were plenty of Pagans of color at the convention, just nowhere near what I had (very unrealistically) expected.  Puzzled, I went to my High Priestess and asked her about it.  After all, she’d been to over a dozen Pantheacons by that point, and I knew she’d be able to speak to attendance trends.  She replied that was that her experience had shown her that many Pagans of color in this country tended to be drawn to Pagan practices that were historically associated with their ethnicities, and that these Pagan practices had their own communities and interests that didn’t always play well with the heavily Euro-centric contemporary practices that tend to dominate Pantheacon.

At the time, I wasn’t particularly satisfied with that answer for many reasons.  The largest of which is that I didn’t (and still don’t) feel that you have to have a genetic or historic link to a religion in order to have the desire to practice it.  After all, I was called to Gardnerian Wicca, a religious practice dominated by English culture, and the closest I can get to that genetically is one Welsh great-grandparent.  Blood, I thought, obviously didn’t call to me to my religion.

And yet, I now think maybe my blood had more to do with it than I realized.  When I was seeking, I knew the Abrahamic religions did not match how I felt spiritually and that Paganisms did, but I never once even considered Pagan paths that are strongly associated with non-white races.  Santería, Ifá, and Vodun never even crossed my mind.  I briefly flirted with Hinduism, but felt like I was voyeuristic Peeping Tom.  I was an outsider there, and after some reflection, I couldn’t find an answer to whether or not I would be able to shake the feeling that I was appropriating instead of practicing.  It wouldn’t be a stretch to think that some Pagans of color would feel similarly when practicing European Paganisms.

Illustration by Gabriel Ivan Orendain-Necochea.  As distasteful as I personally find images of the KKK, I cannot deny that this creates a strong visual argument.

I believe that remembering how much of an outsider I felt in this experience was my particular trigger with Pantycon’s description.  It is impossible to ignore race.  People can trumpet all day long about how colorblind they are, but almost everyone has some subtle difference in how they interact with those of their own race and how they react with those outside of it.  Racial prejudice is normal.  Some of it is probably even biologically hardwired.  For example, the legal world has established that eye witnesses are less likely to be able to positively and correctly identify a suspect when that suspect is of a different race than the witness.  In other words, your brain cannot easily recognize the microdifferences in the faces of people who are of a different race than you.  But racial prejudice does not mean that one is a racist.  A racist is one who believes that a certain human race is superior to any or all other races. Racial prejudice just accounts for differences in human character or ability; albeit differences that are strongly influenced by stereotype.

If we ignore race altogether, we will have no chance of keeping prejudice from becoming racism.  We will have no chance of combating the smaller effects of this prejudice.  We have to be educated.  We have to be aware of how we treat others.  We have to take the requests for consideration by people of color incredibly seriously.  Combating racism requires nothing less than constant vigilance.  It will be uncomfortable, and it will be inconvenient, but we cannot overcome prejudices unless we are aware we have them and we constantly interrogate them. 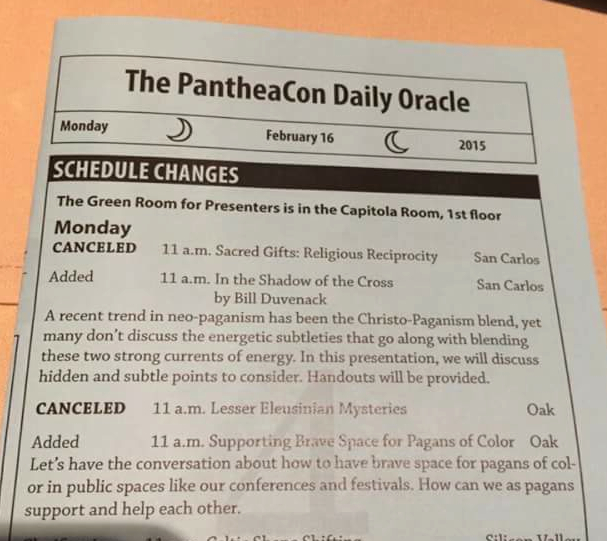 Photo by Shauna Aura Knight.  Sometimes you have to cancel one mystery exploration to do another.

That being said, interrogation has to come with safe space.  At this convention, there was difficulty maintaining safe space for Pagans of color.  Throughout the halls, I heard whisperings from the support staff about how so many people were feeling threatened, and a crucial point of this was how the Pagans of color hospitality suite was received.  Some people reacted as if the very existence of a place for Pagans of color to safely discuss issues pertaining immediately to them threatened some of the white attendees.  I heard that people would yell “Racists!” into the suite, disrupting programming.  In addition to being inexcusably rude, this intrusion is incredibly puzzling from a Pagan perspective.

When we engage with mysteries in our practices, we largely accept that if we are outside that mystery, we will never be able to fully understand it. But we still hold sacred the space for the mothers to explore motherhood and so on.  Why, then, would it be so difficult to hold sacred a space for Pagans of color to interrogate more fully what it means to be a Pagan of color?  What comes out of this sacred space and can be revealed to others will be useful, healing, and helpful to all.  Even if not everyone can fully understand the mystery, the outsiders can at least listen to the illuminations developed within.  If they do, they can better interrogate their own responses to that mystery.

Listen, damnit.  It’s not that hard.

So, I suppose that this Pantheacon really drove home to me that no one can afford to ignore race.  In the Pagan context, we all need to be especially aware of racial prejudice, racism, and the line between them.  We also need to acknowledge that people of a particular race can be made to feel like outsiders in certain practices.  Therefore, we all need to listen more closely to each other in order to be able to more fully explore different modes of spirituality safely.  We also need to make sure that safe, sacred space is maintained for those of a minority race within a religion to be able to explore the additional mystery of how their race informs and influences their practice.

4 thoughts on “Pantheacon 2015: Listening to Pagans of Color”