The Hanged Man in the Universal Rider-Waite, Hanson Roberts, and Robin Wood decks.

Looking to Waite for an idea of the Hanged Man’s meaning is one of the most maddening exercises in all of Tarot.  For example, on page 22, he says the card means ‘prudence’ but on page 116 he clearly says it is not prudence, and then finally on 285 he says it means ‘wisdom’!  The most detailed description, obtuse as it is, follows:

The gallows from which he is suspended forms a Tau cross, while the figure–from the position of the legs–forms a fylfot cross. There is a nimbus about the head of the seeming martyr. It should be noted (1) that the tree of sacrifice is living wood, with leaves thereon; (2) that the face expresses deep entrancement, not suffering; (3) that the figure, as a whole, suggests life in suspension, but life and not death. It is a card of profound significance, but all the significance is veiled. One of his editors suggests that Éliphas Lévi did not know the meaning, which is unquestionable nor did the editor himself. It has been called falsely a card of martyrdom, a card a of prudence, a card of the Great Work, a card of duty; but we may exhaust all published interpretations and find only vanity. I will say very simply on my own part that it expresses the relation, in one of its aspects, between the Divine and the Universe.

He who can understand that the story of his higher nature is imbedded in this symbolism will receive intimations concerning a great awakening that is possible, and will know that after the sacred Mystery of Death there is a glorious Mystery of Resurrection.

Thanks, Waite.  That’s really helpful.  But let’s examine some of the salient details he’s noted anyway, beginning with the tau cross and the fylfot cross. 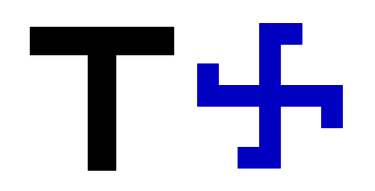 A basic tau cross and a basic fylfot cross. Both are symbols used in Freemasonry.  If we’re to be very technical, a fylfot cross differs from a swastika in that it has shorter arms extending from the central cross.

As we can see, a tau cross resembles a T, or a tau in the Greek alphabet.  It’s a very simple symbol and, as such, pops up in many different cultures.  Obviously, under Christian symbolism it has come to be aligned with salvation salvation through the identification of the tau with the sign which in Ezekiel 9:4 was marked on the foreheads of saved persons.  In Egypt and Sumer, it was more an emblem of immortality or generally of life (sometimes specially as a phallic symbol).  In this, it is connected to Tammuz, the dying and rising God, and through him the Greek deity Attis and the Roman Mithras.  In Mayan culture, a similar cross was considered a “tree of life.”  These correlations with life or a life cycle seem to be more of what Waite had in mind than Christian salvation, given his direction to observe “that the tree of sacrifice is living wood, with leaves thereon.”

Upon this tree of life, then, a man is hanged in a manner used in the era of the tarot’s birth as an execution or a humiliation.  This overlay of death would seem to be a perversion of the tau, but–as Waite notes–the man is clearly not suffering.  Moreover, his body is twisted in such a way that it resembles the fylfot cross or the swastika, a symbol that has long been used within Hinduism to evoke Shakti, the personification of primordial cosmic energy or of divine feminine creative power.  The word “swastika” also translates as “to be good” or “to be with the higher self.”

So perhaps this card is using a horrible image to show a greater truth.  Even if this does show a torture or an execution, it is still within the realm of Life.  Even as the life of the man is held in suspension, Life still continues, and the amazingly powerful, benevolent, creative cosmic energy that birthed Life still resides within the suspended man.  Even if that man does die, that energy will live on and be reborn in his new form.

Rachel Pollack seems to be drawn most to the inner calm that comes from a realization such as this.  She says that the Hanged man feels life through this inner awareness and that he “affects us because it shows a direct image of peace and understanding.  The calm shows so strongly in the card because the Hanged Man has surrendered to the rhythms of life.  In the old initiations surrender involved joining the rituals instead of just watching them.  For many modern people it involves releasing the emotions they have locked up for years.”

Another very literal interpretation of the card is simply to change your perspective.  Sometimes looking at things “upside down” gives you a new insight that wouldn’t have been achieved through conventional means.

This is more the interpretation Robin Wood had in mind when designing her card, which to her “means suspense, change, looking at things from anther viewpoint” or “willing to surrender to higher wisdom, or sacrifice to gain this wisdom, especially in occult or spiritual matters.  An inner search for the truth.”

Wood consciously removed the ropes from her Hanged Man, which makes his inversion entirely voluntary.  Like Waite’s tau, Wood suspends her man from living trees, which are ash to call to mind Yggdrasill, the world tree from which Odin hung to gain the knowledge of the runes (upon which he died, but used the knowledge he’d received to immediately restore himself).  Unlike Waite, however, her man is between two trees to show the two vantages he balances:  old and new.  These trees are also reminiscent of the rune hagalaz, which has connotations of an ordeal or a drastic change:   a wake-up call from the Gods.

From the viewpoint of the man’s normal orientation, his upper body forms the inverted triangle which is the first-degree sign of Wicca, which indicates he is on a new path to wisdom and changing his priorities.  He wears a white shirt to show the purity of his resolve on this path.  (This is also the symbol for water.)  His legs form a slightly-cockeyed upper-pointing triangle, which represents the symbol for fire (along with his red trews, which also represent his courage), and will.  All the Hanged Man does, he does through his own free will.

Wood’s Hanged Man has a nimbus of light around his head to show the spiritual radiance his inversion has given him, and it stands out against the grey background, which represents the balance of night and day mingling equally.  It can also stand for the drabness of the views the man held before his inversion, which is being lighted by his new outlook.

As a final note, it may well be worthwhile to consider the interplay between water and fire in all the versions of the Hanged Man.  In Waite, for instance, the man’s leggings are red (fire), and his tunic is blue (water).  Wood’s man has his upper body in the water sign and his legs in the fire sign (from his perspective).  He brings activity and passivity into balance through his inversion.

Meditation
This meditation is designed to help you learn to release to life and to embrace the power of surrendering.  Close your eyes and begin to take deep breaths.  Imagine that you stand before the ocean.  Waves are crashing powerfully against the shore.  Walk into the ocean and feel that it is warm and soothing.  Allow the waves to sweep over your body.  With each wave that caresses you, imagine that you become increasingly transparent.  Slowly you become one with the tide itself.  See yourself as nothing but ocean–a tide that moves in and out, free and boundless.

Daily Practice
Keep the Hanged Man card with you or place it on your altar.  Difficulties do not cease of their own accord.  When left unattended, they become worse, uglier, and meaner.  Do not run any further from a difficult life situation.  Face it today.  Get to the bottom of it.  Determine what it is you can and cannot do.

The card descriptions are a combination of my own insights and paraphrasing from a handful of sources. I’m currently working with Rachel Pollack’s book Seventy-Eight Degrees of Wisdom, Robin Wood’s Robin Wood Tarot: The Book, and a smattering from Waite’s Pictorial Key. I also strongly recommend Joan Bunning’s book Learning the Tarot as well as the resources found on her website, learntarot.com.