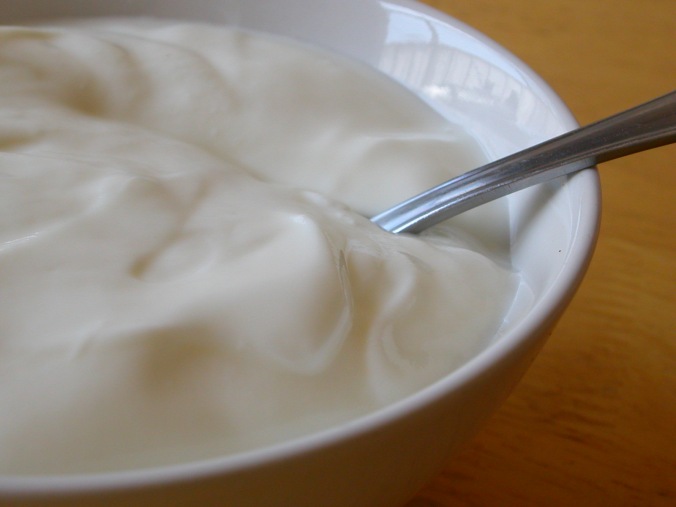 When I first started this blog, it had a really clear vision:  record my progress working through Timothy Roderick’s Wicca:  A Year and a Day.  Initially, of course, my goal was to be done in 366 days.  Life intervenes, though.  I’ve had some really horrible things happen since June 4, 2007, and I’ve waded through several major life changes in those short five years.  During that time, I’ve learned that it’s really hard to consistently keep up with an external spiritual exercise when you need to process and work through your individual spiritual needs and practices.  Consequently, this blog has become crazy-diverse.  Today, I’m proud to continue adding to this diversity with something I’ve never seen on a pagan blog before:  a how-to of making your own yogurt.

This practice was not initially spiritual for me.  I’m dirt poor right now, but I like to eat lots of yogurt.  After I did the math and realized that making my own yogurt would save my pocketbook $600 annually (and save the earth a TON of plastic waste!), it was a no-brainer to begin culturing. But my pursuit of financial control yielded a decidedly spiritual side effect.  I am more thankful for the yogurt I make.  The effort I put into it–though it’s not exactly labor intensive–gives me a deeper appreciation for all the energies that go into making even convenience food.  I’ve realized I’m far more likely to say grace over my yogurt meals than I am even when I cook my own food.  I’ve also started making my yogurt production a sort of mini-ritual, which I might detail in a later post.  My point is this:  I’ve gotten a lot of spiritual benefits just by doing this one mundane act, and I’ve pursued finding ways to make this mundane act more spiritual.  I feel better about practically all aspects of my life now just by having this one weekly ritual (and daily reaping its physical and metaphysical daily benefits when I consume the yogurt).

I would eagerly counsel any pagan to try to find something similar in their lives to ritually make and consume every week/day.  If you want to try with yogurt, I can certainly explain my method for creating a good product and leave the spiritual side to you…which is basically what the rest of this post is.  How to make damn good yogurt. 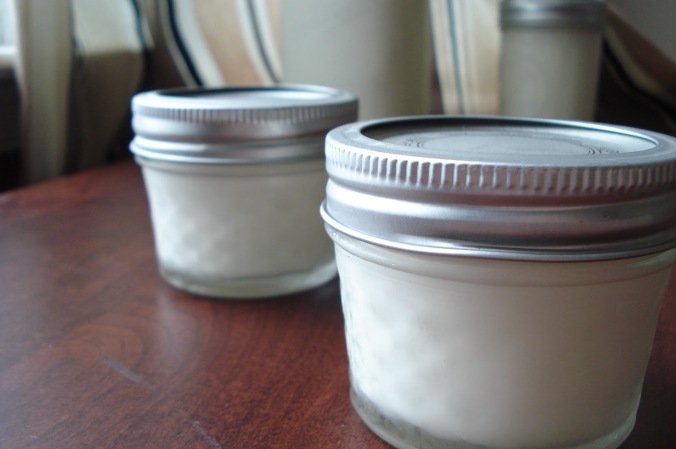 To begin, I offer you a list of the tools I used to make yogurt.  Do not freak out.  It is a long, specialized list, but it is just the equipment that I personally already owned before starting to make my own yogurt.  You can use whatever you already have to accomplish the same effect.  No Cambros?  Use mixing bowls or stockpots.  No bouillon strainer?  Use a gallon-sized colander and some doubled cheese cloth or cut-up cotton sheets or muslin.  (Incidentally, I love my damn strainer.  I use it several times a week to strain yogurt, loose leaf teas for iced tea, soup stock, etc.  I love not having to fuss with muslin anymore.)  The only thing I can think of that you might absolutely have to purchase (other than milk and a small bit of yogurt starter) is the heating pad, mostly because these days very few of them stay on longer than 2 hours.  However, if you’ve got a consistently warm area in your home, you might not need this either.  A mother of a high school friend of mine made her yogurt by sticking some thermoses in the top of their entryway closet, which was right behind their furnace.  It kept their yogurt culture at a consistent 109°F.  Definitely take stock of your own resources before running out to the stores.  If you do want to do that, though, I’ve included links to my favorite equipment below, as well as their average retail prices.

To begin, set your carton of purchased yogurt on the kitchen counter, since you do want it as close to room temperature as you can get it before adding it to the heated milk.  Next, pour the gallon of milk into a 6-quart Dutch oven, and put the pot over medium heat.  Turn on the probe thermometer, set it to 180°F, and put the probe in the milk, making sure the probe end does not touch the bottom or sides of the pot.  (A binder clip attached to the edge of the pot can help support the probe.  Stir the milk occasionally until it reaches 180°F.  When it reaches temperature, remove the pot from the burner and let the milk cool until it reaches below 120°F.

These temperature points are pretty darn important.  The 180°F temperature is well above what you would need to pasteurize the milk and make sure it’s biologically clean for special cultures, but you want to take it that high to allow the casein micelles in the milk to aggregate.  This will result in a much more solid initial yogurt curd than you would otherwise achieve.  Taking the milk above 180°F will cause it to irreversibly curdle, so take care to halt the temperature at 180°F.  In fact, you can take it off the heat after it hits 175°F if you’re worried about carry over heat.  The low temperature is important, too.  The yogurt culture cannot be added until the milk reaches a temperature below 120°F because the yogurt bacteria will die at temperatures of 120°F and higher.

When the milk reaches a temperature of below 120°F (shoot for 115-118°F to be safe), slowly pour the milk from the pot into the 6-quart Cambro, slowing down even more as you reach the end of the milk.  Look in the pot to see if you have scorched milk or caramelized bits at the bottom of the pan or in the last of the milk.  Do not pour these into the Cambro as they will end up as bitter, solid chunks in the final product and could make the entire batch taste off.  If the pot is clear, add all the milk to the bucket.  After the transfer, take about 3 tablespoons of the prepared yogurt (store bought or reserved from a previous batch), add them directly to the bucket of milk, and quickly whisk it to combine the starter with the milk.  (Incidentally, if you do have a scorch layer, it can be hard to remove.  I’ve learned to soak the pan in baking soda water for 5-15 minutes.  This will denature the proteins a good little bit and allow you to scrape a lot of scorch off the pan with a dish scraper or wooden spoon.  Clean up additional residue using a bit of Barkeeper’s friend on a sponge or cloth.)

Place the heating pad into the bottom of a large stockpot or another vessel deep and wide enough to accommodate the heating pad and the bucket.  Turn the pad on a medium to a medium-high (or high depending on the room temperature), and set the bucket of cultured milk on top of the pad.  Place the probe thermometer back into the cultured milk and set the alarm temperature for about 118°F.  This will allow you some leeway to adjust the heating pad temperature if it begins to increase the milk temperature rather than hold it fairly steady.  Do not allow the culturing temperature to exceed 120°F or drop below 100°F.  I find I prefer the final product if I can keep the temperature between 106-112°F.  Place the bucket lid slightly askew on top of the bucket, then drape a bath towel over the entire apparatus.  Allow the yogurt to culture for 6-8 hours.  (I often make yogurt at the end of my day, culture it overnight, and strain it the following morning.)

After the yogurt has cultured, drain off any whey that has already separated from the curd.  Discard the whey or keep it for another project.  Set the bouillon strainer over the 8-quart Cambro bucket and carefully spoon in about half the yogurt curd, then slowly pour the remainder into the strainer.  The strainer should accommodate almost all the curd.  If it does not, allow the yogurt to drain for 15 minutes, then add the remainder of the curd.  Allow the yogurt to drain until almost a full 2 quarts of whey have separated from the curd.  This may take 45-90 minutes, depending on how tight the initial curd is.

After the whey has drained off the curd, plop the curd into a clean 2-quart mixing bowl with a pouring spout.  Carefully scrape stuck curd off the strainer screen with a silicone spatula.  Do not be aggressive as you do not want to rip or puncture the screen.  Immediately empty the 8-quart Cambro, fill it with water, dish soap, and a big shake of baking soda, and allow the strainer to soak while you finish the yogurt.  Curd that dries on the strainer is definitely more difficult to clean!

Take a whisk and vigorously whip the yogurt in the mixing bowl until it is smooth, creamy, and shiny.  If you prefer to add a sweetener or a flavor to the yogurt, you can do so at this time.  When you’ve sufficiently whipped the yogurt, line up 8 clean wide mouth, half-pint mason jars on your counter and pour the yogurt into the jars, leaving at least 1/4-inch of head space.  Cap with clean lids and rings and transfer the yogurt to your fridge.  I label my lids “yogurt” in permanent marker and add the date I made the yogurt in a dry-erase marker so that I can reuse any good lids for subsequent batches.

That’s it!  You’re done!  Should you need to watch someone go through these or similar steps, I recommend this video from Paula Rhodes of Salad in a Jar and a great episode of Alton Brown’s TV show, Good Eats: Good Milk Goes Bad (season 6, episode 4). My technique is sort of a mashup of these two videos.  One quick point:  I really disagree with Alton Brown’s method of adding powdered milk to fresh milk.  It may help get a thicker curd if you’d rather not strain the yogurt at all, but I think heating the milk to 180°F gets just as thick a curd as adding powdered milk or gelatin does, especially if you strain a little whey off.

One thought on “Potions in Action: Homemade Yogurt”