*I originally wrote this in early October of last year.*

Well, I took the plunge and did it.  I bought a silver chalice.  It’s actually a vintage Kiddush cup, and it came to me from Israel via eBay.  I also must admit that I plunged some time ago, but neglected to record that here.

The seller (pasarel) had it listed as a sterling silver goblet (marked 925) with a gold washed interior that was about 6.1 inches high and with a 2.75 inch base that weighed about 80 grams or 2.5 ounces.  I loved the turned, stepped base and the deep bell shape of the cup itself and the gold interior looked awfully pretty, so I made a low offer and–to my surprise–it was received.

When it arrived today, my surprise was redoubled.  After unwrapping the protective packaging, I was left with a very pretty cup…but one that was exceptionally light!  I guess I didn’t figure that 80 grams was about half the weight of sterling water goblets I’d seen in America, which were about 5.6 troy ounces…which is about 174 grams.  The bell of the cup is so thin, it feels almost tinny.  Feeling a bit skeptical, I took it to Eugene Coin and Jewelry to have it tested.  The good news is that it is silver throughout, so I didn’t make an unforgivably silly purchase.  The bad news is that it’s super duper light.

I’m not sure what I’ll do, if anything.  I like the piece a lot.  In fact, I like it’s appearance a great deal more than any sterling goblet I’ve been able to find in the States (most reliably from Replacements, Ltd.).  The lightness is momentarily startling, but maybe I could have the hollow base filled with something to offset that.  Or not.  I rather like the idea of knowing the energy would just be silver and not deadened by sand or something. 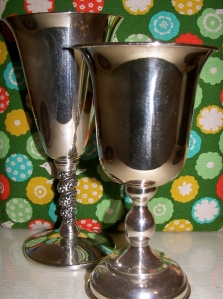 As fate often has it, I happened to be showing a new housemate around the Eugene thrift stores and happened across a silverplate chalice that I kinda liked.  It’s probably something I would have passed by if I saw it on eBay, since I’m not a fan of overwrought stem work or the kind of flute-like shape, but when I picked up the piece and handled it just for curiosity’s sake, it felt very right.  “Huh, I guess you’re mine”, I said, and I was very ‘okay’ with that.  It’s got a solid weight to it, and I know I won’t be constantly worried about destroying it in a cataclysmic accident of clumsiness, since it isn’t glass, it is pretty solid, it’s silverplate instead of silver, and it cost me all of $6.50.  I will happily take this to my covenstead to be my chalice there, and to any other public events I must go.